Sword of the Samurai Slots 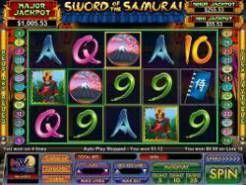 Play Now
Or at least to see if you can spot it on the reels of this game. Sword of the Samurai gives away its theme in the title, as we head to Japan to play this one. It is a colorful slot too, rich in its theme and in the detail provided. The controls are easy to understand and laid out well underneath the reels. That’s where the action takes place, so let’s see what lies in store for us there.

Five reels await you if you wish to face the samurai. You will also see 25 lines in action in this game.

Each line can take a single coin worth between a cent and one dollar.

Special icons in Sword of the Samurai

The samurai was always going to be given the most important role here as the wild symbol. This can replace almost everything else – only the logo cannot be substituted as this is the scatter symbol.

Are there bonuses to be won?

Can you find three or more logos on the screen in one spin? If this should occur, the Sword bonus will begin. Rather than being awarded a certain number of spins, you begin play and continue until a samurai occupies both reels one and five simultaneously. In each spin you play, the multiplier increases by 1x from the starting position of 1x on the first spin. The most games you can play is 25. If you find three samurai wilds anywhere in one spin, you will unlock the Samurai bonus instead. This rewards you with eight guaranteed free games. All wins secured during those games are granted at 3x multiplier. The scattered logos are changed into wilds for these games too, meaning there are additional chances to get wild wins. You can also retrigger the games in this instance.

Download and play the Sword of the Samurai slot game now

We love free games and having two ways to win some here makes this game a refreshing one to play. If you like the idea of meeting a samurai warrior – especially one who can be so useful to you – it is certainly worth loading Sword of the Samurai now to see whether it will bestow some good fortune on you. We hope you get the chance to score some big multipliers as you play.
Play Now