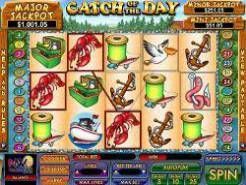 Play Now
NuWorks isn’t the best-known of the software gaming providers around today, but they have created some impressive slot games. Here we will take a closer look at just one of them, which goes by the name of Catch of the Day. This has a fun theme which, as you might expect from the title, is based on fishing. Now that may not strike you as one of the most thrilling topics that could be used for a slot game, but this is a good one, as you will see.

Let’s start with reels and paylines

Things start in quite a standard way, with 25 lines to play and five reels to spin.

Betting options for Catch of the Day

Penny betters will love this one, because they can bet that amount on each line. There is an opportunity to increase the value if required, and the highest coin to be used here is $1 a time.

Wilds, scatters and other symbols

There are FOUR wilds in this game. Four symbols show you fish, with either one, two, three or four fish on the symbol in each case. The single fish are grouped and appear on the fifth reel only. You can only get the other three options appearing in feature games. In each case, the number of fish gives you a multiplier for whatever prize you win in that case. Get two fish in one win and the biggest multiplier applies. Meanwhile, look out for scattered fishermen as well. Two or more grant a prize multiplied by whatever you bet on all the lines.

Can you find a bonus level in Catch of the Day?

If you get a fisherman on the first reel and a fish anywhere else, you are given five free games. It doesn’t sound like many, but it can be retriggered up to three times. A retrigger means you go back to five games. You also get grouped wild fish – doubles, trebles and quadruples in each subsequent case – on specific reels in each case. You can check out the pay table to learn more.

We really liked this, and the assortment of wild fish makes it a real winner. All you need to do is to give it a go to see whether you like it as much as we did!
Play Now