Can You Beat the Bank Bandit? 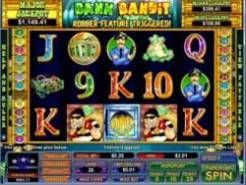 Play Now
It’s not that hard to find some slot games that involve banks or cops and robbers, or some similar sort of theme. Here we have the Bank Bandit slot, hailing from NuWorks Gaming, and it has a few nice touches in evidence. The game itself looks very good, and the first thing you might just notice is the presence of not one, not two, but three progressive jackpots. Yes, you’ve got the mini, the minor and the major jackpot. So you have that to hope for as well as looking at any potential prizes that might show up on the reels.

Let’s start with reels and paylines

There are five reels involved in the layout here, and 25 lines in action.

You have the minimum of one cent per line here, which makes up a quarter-dollar bet if you cover everything in one spin. You can’t increase this as much as you might think though – the maximum line bet is just a dollar.

Wilds, scatters and other symbols

The wild symbol is a robber, which is quite appropriate for this theme. He will only appear on the second and fourth reels though. He also carries a multiplier, which could be 1x, 2x or 3x your bet. You can also locate a scatter on the reels if you look out for the bank vault. That makes perfect sense too, so it is nice to see the software provider looking at some appropriate symbols here.

Can you find a bonus level in Bank Bandit?

You’ll normally trigger free spins with the help of the scatter, but in this game you do need to use the wild as well. You need to get the robber on the second and fourth reels at the same time, with the vault appearing in-between on the center reel. This will bring you 20 free games. However, you can also get more free spins with three scatters on the screen. Since these are vaults, you have to open one to see how many spins you get. This will be between five and 15.

We really like the game on offer here, and not just because it has a nice polished theme. You can also enjoy two versions of the free spins round you often see in slot games, so you have that to look for as well. Give it a go and see what you think.
Play Now